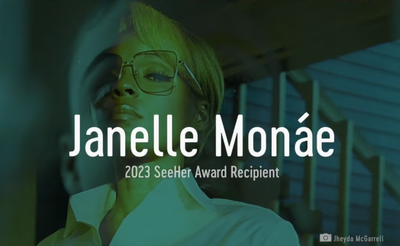 Your work on behalf of the underrepresented, the marginalized, those up against well-established seemingly intractable power structures, continues to inspire us in every corner of our lives, to carry these important messages of justice consciously and consistently.


To that end, you may have seen some of Catie’s handiwork during the Critics Choice Awards. You wouldn’t have been alone. While the numbers aren’t quite in, about four million other people also did.

The spot bears the unmistakable take, the vision, the sure hand, of LifeNow’s co-founder Catie Riggs. Thanks for the inspiration.

#SeeHer is a collective of producers, directors, advertising agencies and marketers, those who seek to represent women and girls authentically so that archetypes of success are empowering and not driven by the perceptions of success drawn by other populations. For eight years now #SeeHer has been awarding an outstanding promoter of this important emerging ethic. This year’s award, presented by her GLASS ONION co-star Kate Hudson, landed in the hands of the irrepressible Janelle Monae whose acceptance speech highlighted the women warriors she has fought to portray and a particularly poignant moment where she focused tribute upon those who lifted her up when she didn’t understand her own power and possibility.